Two days ago, (20 Nov), I was working on a friend's computer, updating TeamViewer and a couple other programs. As I was waiting for a program to finish updating, I noticed a TV file transfer notification box pop up. I was not transferring any files, and the friend wasn't even near the computer at the time, so this happened completely without user input. As soon as I was finished, I disconnected, and then later restored a backup image of my computer OS to the day before, just in case something nefarious was going on. So, I grabbed a screenshot of the file transfer box, but it shows nothing transferred. There are no TV logs, of course, because I restored my system to the day before, which deleted the log capture of that day. The file transfer says it was initiated by me. 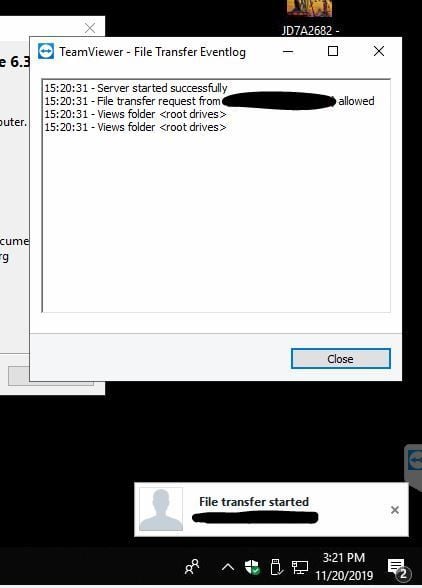 Does any one have any idea what happened? Was that an infection trying to jump into my machine? Did that have something to do with the remote update which TV needed due to a vulnerability found recently?

I have been told that it is possible to work on infected computers without getting infected, as long as I don't open a file transfer connection. Is it possible there was some sort of "file-less infection" or worm which was trying to infect me as well? Because both computers were scanned with ADWCleaner and nothing was found.

Thanks for any insights. We were both updated to TV 15 with patch before initiating the connection. Both computers are using Windows 10; one on v1803 and one on v1903.